Thomas "Pat" Bohannan is the middle-aged sexual predator behind "Alexa di Carlo". Bohannan is also known as "Matt" when he scams escorts, and "Caitlain" when he flirts with minors on teen forums and solicits nude pics from them

The strange, revolting case of sophisticated sociopath and sexual predator Thomas "Pat" Bohannan gets more rotten with each layer we peel back. It all started out with the investigation of a suspicious anonymous sex blogger, "Alexa di Carlo".

The thing is, there is no Alexa di Carlo. Take a good hard look at the face of Thomas "Pat" Bohannan, the man who spent his time sitting at a government computer job pretending to be a sexy twentysomething escort/nymphomaniac/academic in San Francisco. Not quite the high-class drop-dead gorgeous call girl blogger you expected, is he? (After all, the sexy photos he had first used to represent "Alexa" were long ago confirmed as having been stolen from a well-known cam model. Oopsie!)
How did Bohannan let his big secret slip? This is how his network of online personas and crimes unraveled...
Firstly, in the process of researching "Alexa" the creepy and irritating sex blogger, it was found that Bohannan accidentally registered one of the domain names associated with "her" sites in his own name with his address in Tennessee, where he used to live. Oopsie! "Caitlain", another identity of Bohannan's, also lived in Tennessee, according to "her" MySpace profile, which also includes "Alexa's" typical fake academic credentials:

Once we had his name, it was just a matter of googling the guy. According to Bohannan's LinkedIn page, he went to the same university as "Caitlain"! Oopsie. 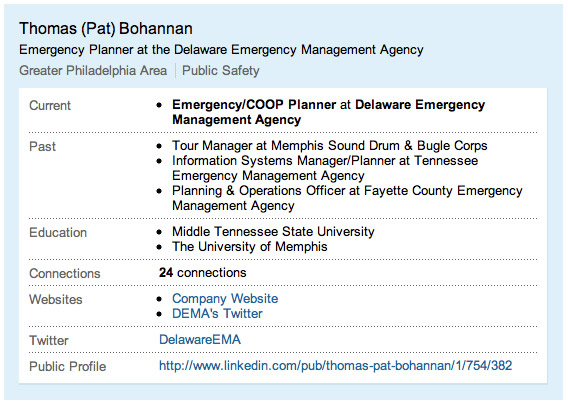 The next big mistake Bohannan made was that he purchased four very telling books from Amazon the day after "Alexa's" main domain, www.RealPrincessDiaries.com, was purchased. Mere hours after this exposé went live, Bohannan deleted his Amazon wish list, along with most other traces of "Alexa". Here's the screen grab: 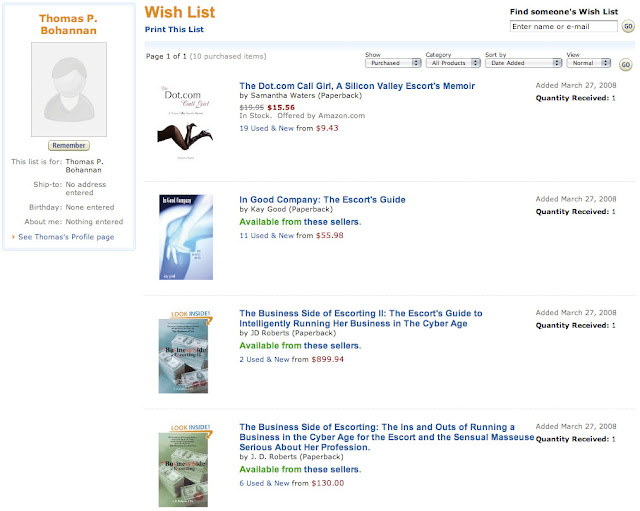 Hmmm, why would a man who works in emergency management suddenly decided that he needed to know how to be a female escort? He made sure to give the books a good review on his blog, though. Oopsie!
Speaking of domain registrations, Bohannan popped up online after being exposed, claiming he's only "Alexa's" webmaster, and switched the registration for "her" main domain back into his name: 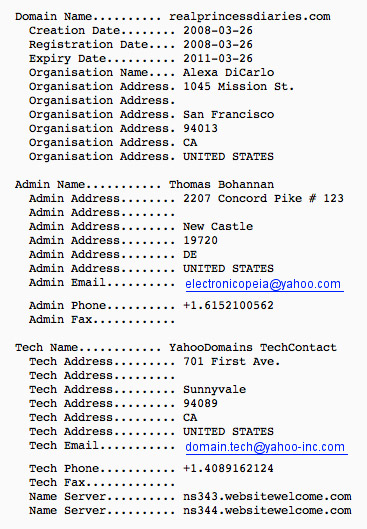 If Bohannan was just "Alexa's" innocent webmaster (for whom "she" manipulated women into fucking) why is it that no one has ever seen Alexa, Alexa refuses to meet with trusted sex educators and activists, and repeated attempts to get a female voice on the phone were rebuffed? If "Alexa" is going to a small grad school program at UCSF like "she" claims, why do no students there remotely match her description, and why do academics in the Bay Area insist there is no woman in their circles who could possibly be "Alexa"? Because there isn't *any* female involved in *any* part of the "Alexa" character!
None of the IP addresses used by "Alexa" pointed back to San Francisco, where "she" claimed to be enrolled in grad school at UCSF. The IPs came from the Delaware/Philadelphia/New Jersey area. While "Alexa" was claiming to be a stripper in Florida, "she" generated a weird cover story about frequently commuting from Florida to Philadelphia for school, perhaps to explain any stray IP addresses. (No known "Alexa" IP addresses are from Florida, either.) Oopsie!
Pat Bohannan has been employed at a computer job at the Delaware Emergency Management Agency (DEMA), although he claims to have have been recently fired. Bohannan had the ideal career for being able to sit on his ass all day blogging/tweeting incessantly as "Alexa." Yup, not only is Pat wasting any old employer's time and money, he was actually on the government's payroll.
"The Real Princess Diaries": Your tax dollars work, promoting throat-fucking, conning escorts, and collecting kiddie porn!

But the story of Bohannan's sexual web of lies keeps going...

Before Pat became "Alexa," he was engaging in questionable online interactions with minors via his teen sex education site, "Caitlain's Corner." (Here's one blog's take on that matter.) As "Caitlain", he sums up his whole situation perfectly on this forum for teenagers: 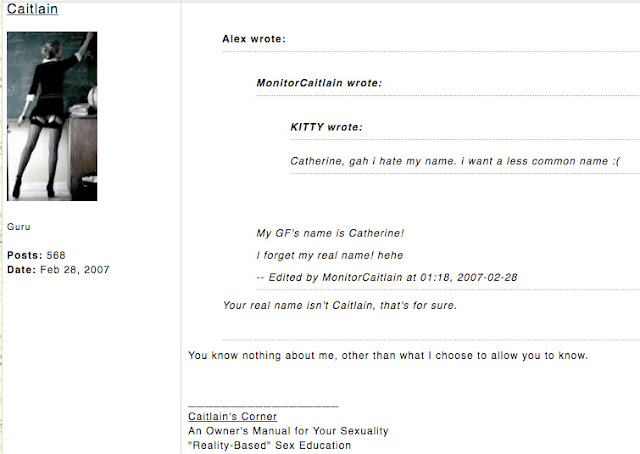 Bohannan founded his own teen sex education site, "Caitlain's Corner", after getting banned from the forums on both Student.com (where he was apparently known as "Agent 69") and Scarleteen.com (where he went by "Caitlain" and was known for being a creepy pervert.) "Alexa" wrote in an entry on RealPrincessDiaries.com (which has all since been deleted) in December 2009 or January 2010 that "she" did, in fact maintain Caitlain's Corner. The site was listed on the blogroll under, "Learn How to Fuck"-- which is his idea of an age-appropriate way to title a sexuality resource for (as "Caitlain's" Myspace page refers to "her" target audience) "pre-teens, adolescents and young adults." From "Alexa's" blog roll:

It was around the time that "Caitlain's Corner" was founded that the first incarnation "Alexa" was born on a stripper blog called Sensual Exhibitionist. (Since deleted.) Bohannan's penchant for underage sexuality is extra disturbing when you consider that when he lived in Tennessee, he volunteered to work with and shoot photos of high schoolers. As "Caitlain", Bohannan groomed minors into engaging in sexually inappropriate conversations and sharing nude photos of themselves. What might he have been up to WITH REAL KIDS IN REAL LIFE?

Here's Bohannan's blog (as "Matt") about what he's looking for when it comes to paid sex, which he deleted minutes after someone found it and posted it to Twitter. Since Bohannan, writing as "Alexa", bragged to people that he was a client with amazing legs (a former leg model!), this might actually be a real photo of his body. He didn't delete this in his initiate purge of all "Alexa"-related materials, so perhaps he was planning to continue using this profile to send to women he wants to pay to fuck. The full list of Bohannan's kinks and what he wants in an escort, in his "The PSE Blog", slang for a client who wants the "porn star experience":


As "Alexa", Bohannan frequently romanticized rough throat-fucking, operated a photo blog devoted to sexy lower back tattoos, and edited a blog called "My First Professional Sex". As it just so happens, the real Bohannan has a thing for throat-fucking, back tattoos and "breaking in" new escorts and conning women into becoming escorts. (Luring a woman into prostitution is a felony.) He used "Alexa" to groom newbie and wannabe escorts (as well as the minors he flirted with) into thinking his own fetishes were hot, and then as "Alexa", convince them to meet "her" "trusted client Matt" to do those things. This is the work of a deeply devoted sociopath.

Why was Bohannan exposed now? Initially, this started out as a
way of crushing a creepy pest who was suspected of being up to even more misdeeds. But, as more people have come forward with their pieces of the puzzle, it gets worse. We didn't originally know about the nude photos of minors, or how he uses his "Alexa" persona to trick women into having sex with him.

Bohannan wasn't just harmlessly getting his kicks maintaining an anonymous blog as "Alexa" where he could live out fantasies of being a desirable woman. He knowingly spread lies about sex work, advocated unsafe sexual practices, had sexually-inappropriate online interactions with underage youth, all the while passing himself off as an academic and trusted adult who is trained in human sexuality. (Refuted here and also addressed here.) He used bold-faced lies about his qualifications to try and discredit real sexuality activists, and laughed at their setbacks. He stole images from real models and passed them off as him-- implicating these innocent bystanders as suspects in his activities. He bullied one activist by harassing her via email, and gleefully celebrated the demise of a valued sex workers rights publication, $pread Magazine. He threatened to expose another sex blogger. He purposefully mislead and misinformed his large online audience about important sexuality issues. As his "Alexa" persona, Bohannan tricked sex workers into talking to him and having sex with him by using "Alexa" to vouch for him as being a safe and respectful client, as well as tried to lure other women into escorting just to have sex with him. (More escorts are talking privately about feeling violated by having had sex with this con artist.) He ran a "sex education" message board where minors trusted him enough to share nude photographs of themselves. See more sickening tales from Bohannan's underage victims here, here, and here.

Exposing Pat Bohannan wasn't about violating his right to privacy, it was about cleansing a divisive fraud from our midst, and now-- exposing a sexual predator who targeted women and children by committing actual crimes. He wasn't just having some harmless fun, he was hurting people. Some of us felt an ethical obligation to set the record straight. It's about self-defense, supporting victims, and keeping people safe from danger in the future.

Only a few hours after our launch, early Saturday morning, almost all traces of Alexa have been deleted. Information is coming to light as the sex-positive community comes together to expose him while using the Twitter hashtag #fauxho, and people comment on various blogs, including this one. There are many anonymous Twitter accounts popping up to discuss this issue, but the "official" one connected with this site is @ExposingAlexa.
Posted by Expose A Bro at 10:24 PM